There has never been an anomaly in hip-hop quite like the southern trio CunninLynguists. Sampling a wide range of musical genres, they have been musically compared to UGK and Atmosphere in the same breath. They have toured and shared stages with many notable artists including Kanye West and Macklemore, and have produced for Lil' Scrappy as well as KRS-One. They have crafted songs with international soul superstar Cee-Lo Green and politically charged indie-favorite Immortal Technique... on the same album. CunninLynguists have eschewed categories, boxes and labels for 13 years, 5 albums and 5 official mixtapes, all while having what XXL Magazine described as the "Most Hated Name In Rap".

The result? If you want labels, Southern boom-bap. Too white for BET, and too black for MTV2. A preacher's son, a Caucasian guy from rural Georgia and a convicted felon. But mainly they are the epitome of a self-made career, one of the most consistent catalogs of any current hip-hop act and one of the most loyal, worldwide fanbases in all of indie rap music.

Backed with gritty beats, quality rhymes and 808 thump, the 'Lynguists intend on recapturing the soul in southern hip-hop. With what Spin Magazine calls "Outkast's tragicomic poignancy", Deacon The Villain, Kno and Natti continue their quest of painting a picture meant to remind the world that politics, death, racism, relationships, religion and struggle are just as relevant now as ever.

The group has toured worldwide and appeared at several major European festivals including Splash, Open Air Fraunenfeld, Touch The Lake / Zürichfest, Hultsfred, Quart, and in front of 20,000 people at Hip Hop Kemp in the Czech Republic. 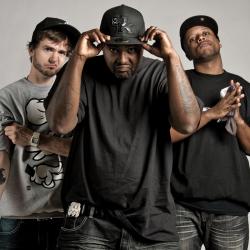