Uke-Hunt is the latest musical endeavor from Spike Slawson (whose past gigs include slinging bass for Swingin’ Utters and providing lead vocals for Me First and the Gimme Gimmes). Initially conceived as a straightforward project combining only ukulele and voice, this luau gradually evolved into much more than a party of one.
About a dozen years after picking up Hawaii’s diminutive answer to the guitar —years during which he often strummed one while serenading his family with classics and Italian lullabies—Slawson lit on the idea of Uke-Hunt as a vehicle to deliver heartfelt and personal renditions of some of his favorite tunes interpreted through ukulele. As he experimented with the medium and expanded his repertoire, he asked some of his talented Bay Area buddies (veterans of Filthy Thieving Bastards, Real McKenzies, The Ramshackle Romeos, RKL, and other projects) to join him on San Francisco’s Fisherman’s Wharf for a little busking around, 808-style.
As a man who bicycles throughout the city on a daily basis, he’s intimately familiar and connected with the broad variety of human specimens San Francisco offers, but playing songs for them on its streets provided an entirely new level of community relations. “Keeping it together in the Hieronymous Bosch painting that is San Francisco public space steeled our nerves,” says Spike. “It provides shitty financial returns, but it’s great practice, and conditioned us for eventual indoor gigs.”
With a debut album containing ten cover songs spanning many genres and generations, it would be easy to peg this project as a takeoff on Slawson’s esteemed all-star tribute band Me First and the Gimme Gimmes, but it would also be a pretty damn lazy assumption. Whereas Me First is a punk rock cover band, Uke-Hunt treats its source material more tenderly, with more individual panache, and with more emotional depth than anything you’ve heard from Slawson to date. He holds these songs close to his heart, and through his delivery, he invites you to also make a deeper connection with them—and him.
From standards like “Green, Green Grass of Home” to modern new wave classics like Depeche Mode’s “Enjoy the Silence,” there’s a notable lack of wink-wink nudge-nudge in these interpretations, even if some of them have risible connotations. When asked about tracks with particular emotional resonance, Spike brings up Barry Manilow’s “Ready to Take a Chance Again,” which he notes “…adds considerable emotional depth to the opening sequence of the [1978 Chevy Chase/Goldie Hawn] movie Foul Play (“You get what you get when you go for it.” So true!).” He’s quick to note, though, that “the somewhat swarthier ballad, “Fascination” is no slouch in the emotions department, either.”
With over twenty songs (not an emotional slouch among them) in their live repertoire, the Ukes are ready to bust out that extensive set list for willing audiences beyond the pickpockets, fly-over tourists, and snack-stealing seagulls of the SF waterfront—just don’t expect to see them share a bill with Spike’s best-known project unless there’s protective headgear involved. “There is definitely touring in our future. I love to travel, and this janky band travels light…but only helmeted would we open for the Swingin’ Utters.”
As you may be aware, dear reader, there are millions of songs out there just waiting their turn to be given new life as a ukulele anthem, so rest assured that this is only the beginning of this unique ensemble. 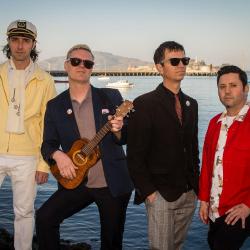