Hailing from Cologne & Berlin Germany, The SEWER RATS have made a name for themselves as one of Europe’s finest punkabilly acts, playing more than 400 shows worldwide, touring Europe, China, Japan & the U.S. with their slicked-back juvenile signature sound of catchy rockabilly and greasy punk rock. Walking the line between Stray Cats-cool, early 90s Social D. and old Rancid, the band sounds like Mr. Ness and Mr. Setzer were hanging out with Hank Williams, teaching him new skateboard tricks while drinkin’ beers on a hot summer night.

Their new album „Heartbreaks & Milkshakes“ takes the band to the next level and sounds like a sugar-high vision of 90s oldschool pop-punk with witty tongue-in-cheek humor and a greasy yet stylish 50s vibe. Delivering 12 catchy and well-crafted poppunk sing-a-longs about heartbreak, black-metal chicks and moving back in with your parents (again), The SEWER RATS are ready to hit the road worldwide in order to promote their new release which will be out on Rookie Records (Europe), Rude Runner (Japan) and t.b.a. (USA & Canada) in spring 2017.

The Cologne punkrock globetrotters are back with a bang: The first single of upcoming album “Heartbreaks & Milkshakes”, out on Rookie Records in spring 2017. 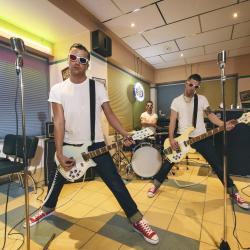