Recently reunited San Diego-area progressive metallers Psychotic Waltz have just returned from performances at Rock Hard and Keep It True festivals, as well as their first-ever headlining shows in Greece. The band is now back at home and has started the songwriting process for its fifth studio album (and the group's first record since 1996) for a tentative late 2013 release. Psychotic Waltz reunited with its original lineup (vocalist Devon Graves, guitarists Dan Rock and Brian McAlpin, bassist Ward Evans and drummer Norm Leggio) early in 2011 after a break of nearly fifteen years. The band took part in the Power Of Metal tour of Europe in April 2011 alongside Nevermore and Symphony X, marking a triumphant return to the scene, and the first time the five founding members had been on the same stage since 1995. Psychotic Waltz built a strong following in Europe due to its highly-regarded four studio albums but remains a mostly unknown entity in the United States. That was due to the fact that none of their albums ever saw a U.S. release, despite having their albums critically lauded by the European press and fans. All that should change with their next studio album, however, for which they have already received several offers from international labels. The band's profile in Europe was further bolstered by the re-release of their four albums on CD by Metal Blade Records, as well as the reissue of all four records on vinyl, as well in an impressive 7-LP box set by Century Media Records, which quickly sold out. To help bridge the gap, and to make their material available everywhere, Psychotic Waltz has released its four studio albums — 1990's "A Social Grace", 1992's "Into The Everflow", 1994's "Mosquito" and 1996's "Bleeding" — digitally worldwide on all platforms, including iTunes, Amazon, eMusic, and others. In July, the band will also release its long out-of-print solo and side-project records digitally, including the End Amen album "Your Last Orison", the Darkstar albums "Marching Into Oblivion" and "Heart Of Darkness", and the Buddy Lackey album "The Strange Mind Of Buddy Lackey". 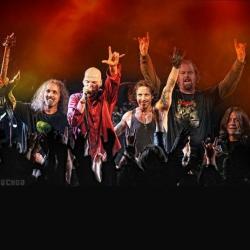