Santa Cruz have just finished the studio sessions for their 3rd album, which will be released on the November! The album, titled Bad Blood Rising, will see the young Finnish rockstars hit the road again for a lengthy, worldwide tour.

Besides the new studio album, there is another reason for celebrating amidst the Cruz camp – it´s now been exactly ten years since Archie Cruz and Johnny Cruz formed Santa Cruz! And what a ride it has been so far: from scoring huge radio hits in their home country with ”We Are The Ones To Fall” and ”Wasted & Wounded” singles, to touring in the US with Sebastian Bach, to getting their music played on ESPN, and recently being listed as one of the ”10 new artists you need to know” by Rolling Stone magazine, the guys seem to be on a serious roll.

Santa Cruz has a reputation for keeping the ”sex, drugs and rock & roll” -lifestyle alive, but, according to frontman Archie, there's more to the songs on the new album than just partying.

”I was probably around the age of eleven when I discovered punk and rock music, and shortly thereafter got introduced to bands like Guns N´ Roses, Mötley Crüe, W.A.S.P. And Poison. And it just hit me really hard, making me want to do the same thing myself, and have a better time doing it than anyone else. But the songs on Bad Blood Rising aren´t about having a good time. Instead, they're about dealing with the issues of depression”, Archie says.

”People on the outside won´t care about looking beyond that 'party' side of you”, he continues. ”But after a few years of partying hard, the lifestyle will get to you. I believe that this is why Jim Morrison died, and why Kurt Cobain shot himself. Chris Cornell as well. Once you get into serious touring schedules, you find yourself either drinking or using other substances more and more frequently. Living a hard life will take a toll on you, and can make you pretty ill. That's a part of this lifestyle that needs to be addressed more, instead of only telling people about the glorious sides of it.”

Still, Bad Blood Rising is not neccesarily a concept album, but more like a diary of what the band has been through in the last few years, on and off the road.

”This album has probably both the heaviest and the softest Santa Cruz moments on it”, says bassist Middy Cruz. ”We didn't intentionally try to come up with something totally different than before, but I guess some of the new influences we've picked up along the way can be heard on these songs”, Middy says.

At the end of the day the apple didn't fall all that far from the tree. People can still expect the Santa Cruz sound. The fast guitars and heavy drums are still there, just served with a different sauce.

”All in all, we see Bad Blood Rising as a 'comeback album'. A start of a new era. It's like what Archie is singing in first single River Phoenix: 'We're going down like River Phoenix, to rise up from the ashes once again'.” 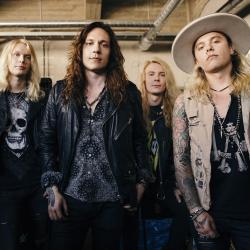